Who is Vladimir Putin ?

Vladimir Putin Biography : Vladimir Putin, a name that is echoing around the world. The President of Russia, Vladimir Putin, is today counted among the most powerful and influential people in the world. The step taken by him to attack Ukraine is affecting every region of the world today. This powerful leader, who has crossed the age of 69, has been known for his fearlessness from his fitness. So friends, let’s take a look at the life journey of Vladimir Putin. After all, we will tell you how Putin, who had been an officer of the Soviet Union’s intelligence organization, traveled till he became the President of Russia. Various aspects related to the life of Vladimir Putin will be discussed here. So read the complete article for this information. 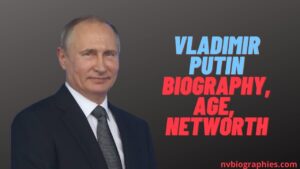 Putin completed his education from Leningrad State University. He received his bachelor’s degree in the year 1975, after which he started working for the intelligence organization of the Soviet Union. This journey of Putin lasted till the year 1991.

Vladimir Putin was born on October 7, 1952 in present-day St. Petersburg. His father’s name was Vladimir Spiridonovich Putin, who was employed in the Soviet Navy. Let us tell you that the name of Putin’s mother was Maria Shelomova. Maria used to be a worker in a factory. Putin’s father served in the ambush squad during World War II. After the end of the war he worked in a factory. Friends, Putin was the third child in his family. His two elder brothers had died.

Putin began his political career as mayor of Leningrad. Until 1996, Putin continued to serve in several government positions in Petersburg.

After 1996, Putin moved to Moscow and took charge in the administration office of the then President. He also served as a permanent member of the Security Council of the Russian Security Association in 1998 and as Secretary of the Council in 1999.

In 1999 Putin was appointed as one of three deputy prime ministers.

The premature resignation of President Yeltsin led Putin to take over as the acting President of Russia.

Vladimir Putin as a President of Russia

2 : Putin has very fond of fitness.

4 : After becoming the President, he started learning English.

5 : Putin can dust off wild animals.

Talking about the Russia-Ukraine war, Russian President Vladimir Putin has sent his army to attack Ukraine, he wants to annex Ukraine and merge it with Russia. The recent situation is such that Ukraine has been surrounded by Russia from all sides. Russia says that if the Ukrainian army surrenders, the war will end now. Now it remains to be seen what this Russian President Putin does next.