Friends, today we are going to tell you in this post about a person who saw his family in poverty in childhood, this person achieved a great success even after not being very smart in studies.

Today we will tell you the life introduction of Sonu Sharma in this post, how Sonu Sharma achieved immense success in his life by doing network marketing business.

Who is Sonu Sharma ?

Sonu Sharma is a Motivational Speaker, Network Marketing Leader, Corporate Trainer and Indian Businessman, Sonu Sharma has a channel on YouTube where it helps people in Network Marketing and Business. Provides information related to cell enhancement.
Sonu Sharma went into the network marketing field and raised himself above the poverty line and brought him to the rich line. He achieved new heights of success after facing many challenges in his life. 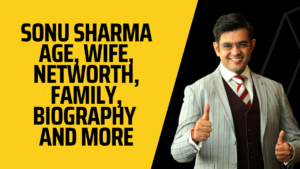 Sonu Sharma was born on 11 November 1981 in Faridabad city of Haryana state. He was born in a middle-class family, where there is a lot of money problem. Sonu Sharma’s family consists of his parents and his wife and their children. Sonu Sharma married Swati Sharma on 30 April 2006.

Sonu Sharma was born in a middle-class family, completed his education at Dayanand Public School, Faridabad (Chartered Accountant) and then completed his college studies from DAV College Chandigarh in 1998.
Sonu Sharma was normal in studies, his family used to give a lot of emphasis to studies but he was not so smart in studies.

Sonu did his studies in commerce and also used to teach accounts to children, after some time he joined Indian direct selling company NASWIZ on 14 December 2006. ( NASWIZ is a well-known selling company in which Sonu was new but has made a place for himself with his knowledge and behavior and started network marketing in this company.

He is a person of creative and dynamic personality, who takes many big seminars and his seminar attracts lakhs of people to listen to his speech, whom Sonu inspires to fight the trouble and move forward. Today’s young generation considers Sonu as their source of inspiration and keeps learning something from him.

Talking about the achievements of Sonu Sharma, he often keeps telling in his achievement seminars, some of them are written below.
1 : Within 2 years of joining network marketing, he became a millionaire. (according to their income)
2 : He became the highest earning person from Naswiz Retails.
3 : He has traveled to more than 40 countries.
4 : Sonu Sharma became the founder of Dynamic India Group on 17 April 2009.
5 : In July 2015, Sonu Sharma bought a Mercedes car.

Many people want to know how much is the salary of Sonu Sharma, so I would like to tell for your information. Sonu’s net worth is around $15 to $18 million, he has a channel on YouTube in which he earns around $15,000 to $20,000 (Sonu Sharma’s income) His monthly income is 30 to 50 lakhs, this is also a lot of money from network marketing. Earn. There is a house in Delhi whose price is approximately 10000000 rupees.

Sonu Sharma Networth is up to the 150 crore .

How can I join the Sonu Sharma team?

For joining the team you can reach him through his official website.

Does Sonu Sharma has children?

Yes, He has two daughters.